Could the hydrant of the future be coming soon to your neighborhood?

A former New York City firefighter set out to bring hydrants into the 21st century, taking on some of today’s most common concerns.

Traditional hydrants break, leak, and freeze, sometimes cost people their lives. The New Sigelock Spartan is designed to be tamper-proof and durable and bring a whole new look to city sidewalks.

“It would shock you how often fire hydrants don’t work when you need them,” said George Sigelakis, designer of the new hydrant and founder of Sigelock Systems. “It’s always in the back of our minds,” said the former firefighter and creator of the first major fire hydrant redesign in more than a century.

In the early ’90s, Sigelakis set out to change how the hydrant is constructed, both inside and out. He spent the next 20 years researching, developing, and perfecting his prototypes. He claims his new hydrants are safer and more efficient than their predecessors with the potential to transform our urban infrastructure. 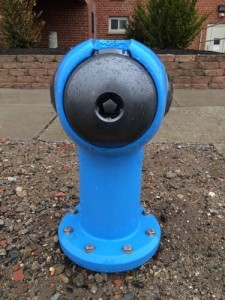 How to build better fire hydrants

Before a redesign, Sigelakis needed to understand the reasons traditional hydrants fail. He identified two key causes. First, most hydrants are made of cast iron. This material erodes with time and exposure to the elements, leading to cracks, leaks, and freezing. Second, traditional hydrants are easy to open. This offers big temptation to someone looking to cool down on a hot summer day. But with an output of 1,000 gallons of water per minute, they are an expensive substitute for a sprinkler. What’s more, residents often fail to close the hydrant properly, leading to leaks and wasted water.

Sigelakis made his better hydrant nearly impossible to break into. The working parts of the Spartan “Security Model” are completely encapsulated in a smooth, spherical locking mechanism. The lock can only be opened with a special tool he provides, which exerts more than 3,000 pounds of inward force. The result is a nearly impenetrable, simply-designed (if somewhat odd-looking) nub. During testing, it took hours to crack into the hydrant with an arsenal of tools that included torches.

Next, Sigelakis used a mixture of stainless steel and ductile iron to construct the hydrant rather than traditional cast iron. These materials are resistant to corrosion and coated with a special powder coating to further prevent rust. He reengineered the internal parts to keep leftover water from pooling and freezing in cold weather. Sigelakis claims the newly-designed hydrant should last 200 years maintenance free.

The Spartan hydrant met and exceeded all the requirements for certification from Underwriters Laboratories, an independent organization that tests products for public safety and is the first and only hydrant to receive a new UL certification–“264B”–verifying its tamper resistance. Currently there are 150 Sigelock hydrants installed across 11 states, though Sigelakis hopes that as these early models stand the test of time, other communities, including major metropolitan areas, will follow suit.

We partner with ServiceTrade for fast, efficient service.

Learn More
Get a Quote